Introducing a BETTER US Currency
By MrArbitrage
The media and analysts are mystified as to why gold is suddenly going up in tandem with the US Dollar because they traditionally have an inverse relationship. This buttresses what I have been contending here for years. Whether the dollar is up or down versus other world currencies is about as relevant as a step ladder on the Titanic. Better yet, remember (in the movie) all of those people who rushed to one end in the ship so when the opposite side sank first, they were momentarily lifted high in the sky as though they were at the top of a sinking sky-scraper? Well, that’s the global currency situation and it’s still too soon to say which nation will have the luxury of drowning on the “upward” end. If you haven’t guessed yet, gold and other precious metals are the proverbial lifeboat and as with the Titanic, few people had a lifeboat in the end because of negligence in preparing.
It always amuses me how "economists" view situations and often come to erroneous conclusions. Some fallacies like the Sun and planets revolving around the Earth have a deceptive allure to them because of appearances. Other fallacies, like the notion that “gold is being quite the rebel lately” as one headline at Marketwatch.com reads today, have additional help from those who have a vested interest in the notion.
It’s mainly the persistent prodigality and plunder of our elected scoundrels that is driving up the price of gold. It’s not just gold; you see oil here at $80 per barrel in a horrendous economy because of the counterfeiting of our elected scoundrels. It is all related. These criminals have for the past year been trying to further con us by outwardly scoffing at the notion of “inflation” and are “warning” us about what they absurdly predict will be “deflation”.
Swindlers like Charlie Rangel, Barney Frank and Chris Dodd have to lie to you in order to prop up their scam. You want me to believe in DEFLATION? Ok, I will say here and now that we have RAMPANT deflation – in our currency- but CERTAINLY not in food, energy, and products that are essential to human sustenance. Sure you can get a great price on a 60 inch plasma TV – because most people cannot afford the plasma right now, nor do they NEED it.
I honestly don’t understand how people actually fall for this nonsense. I live in the real world. I buy my gasoline and see what is happening at the pumps. I buy my groceries and it is nothing short of stunning what their counterfeiting has done at the stores. I was at Sam’s Club yesterday and an average size container of blueberries was $8.00 and an average container of strawberries was $6.00! My generic, store brand gallon of “purified” water is up 30% in a two month period. What items haven’t –technically-gone up in price (like ice cream and soda) have shrunken in quantity by 30%.
So I was waiting in line at the grocery store yesterday. Rather than read more about the sordid Tiger Woods exploits, I took a look at the candy isles that surrounded me and remembered that not so long ago I could buy 2-3 candy items for a buck. Sensing an inflation tirade coming on, I took out my Blackberry camera and took some pictures. I was amazed at how little that dollar can now procure in the way of sweets. The photo below pictures the reality of where we are. The Hershey bar, the M&M’s, KitKat, Twix... are all $1.05 with Florida tax 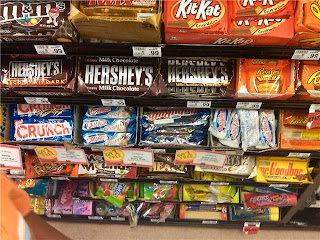 See all the gum: My US Dollar cannot even buy me the cheap, second tier singled pack- of "Freedent" gum! Deflation??? Where are the pitch forks? 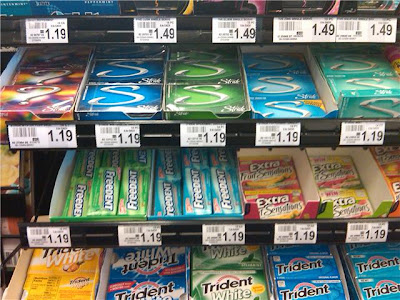 Ladies and gentlemen, this is serious. These illustrations may seem trifling to some but these are the foreshocks of hyper-inflation to come. As you can see, serious damage has already been done. But it isn’t over. As we witnessed on February 25, 2010 – the elected scoundrels met to devise a way to further plunge our nation into the abyss. What they are trying to promulgate with their government healthcare scheme is unmitigated economic jihad on the US dollar and will absolutely require trillions in additional counterfeit dollars. If you –own- debt (bonds) and cash/equivalents – you are unprotected.

Let’s suppose you already own gold and/or silver but you want to add something to your hedging program that can easily be traded as –currency- in smaller denominations.

I have an idea for you. To set the table for this one, I think we agree it is an axiom that our dollar is secured by little more than the empty rhetoric of elected swindlers. Due to their profusion, the dollar has lost over 90% of its value over the past century and they are on their way to 100%. Because they took us off of the gold standard, there is no measurable valuation for our currency and the same goes for our Treasury Bills, Notes and Bonds.

By thinking a little outside the box, the realization came to me that the US Government currently issues an overlooked vehicle that COULD easily function as a cash-like currency –and- an investment. Unlike the Federal Reserve Notes we use, this vehicle is backed by something with measurable, intrinsic value. The best part is that it could also go far higher in value than the broad inflation rate.

Without further ado, the idea I bring you is none other than the US Postal Service’s recently introduced “Forever Stamp” (Pictured below). 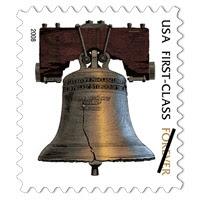 The US Postal Service is not going away regardless of their balance sheet. They should make major adjustments but regardless, mail will continue to be delivered and this stamp is a GUARANTEE by the US government. It is not an empty guarantee giving you a claim to mere “thin air”. As it is written on their website (linked below) – “The Forever stamp will always be valid as First–Class postage on standard envelopes weighing one ounce or less, regardless of any subsequent increases in the First–Class rate.”Source: https://shop.usps.com/webapp/wcs/stores/servlet/ProductDisplay?langId=-1&storeId=10052&catalogId=10001&productId=10001880&parent_category_rn=&orderItemId=210773147&rn=OrderItemDisplay

THINK about that. That little stamp currently GUARANTEES you that you can transport a standard envelope weighing 1 oz or less – all the way across the continental United States. That takes gasoline friends. Not only does it give you claim on energy, it also gives you a piece of “manpower” regardless of wage inflation. If the dollar continues to plummet, causing gasoline to go to $500 per barrel and minimum wage to $50.00 per hour, you still have the right to transport that envelope from Key West to Seattle if you want. Now that’s a great deal more than what Little Timmy Bonaparte at Treasury is guaranteeing! Going forward in a hyper-inflationary environment, the USPS will have to raise prices on postage dramatically, creating a secondary market for “Forever Stamps”. Any difference in the spread between new stamps and the old Forever Stamps would be what I dub henceforth as “stamp arbitrage”. Efficient markets wouldn’t allow for that spread remaining wide for long.

Yes this idea is bordering on the tongue-in-cheek side but you never know. It could sweep the nation if enough people and business owners gradually participated. If it hit the proverbial fan, this would be easier than bartering with the gold dust you might have to grind up from your bullion (for smaller purchases). Item prices could be quoted in terms of the quantity of stamps for smaller items and in “books” (currently $8.80 for a book of twenty) for larger items. I don’t expect Wal-Mart and McDonalds to accept stamps as currency anytime soon but if you are a business owner who doesn’t mind holding some stamps and you are fed up with the financial jihad being waged against you by your elected swindlers - put a little sign in your window that says “We accept Forever Stamps” or “Forever Stamps are same as Cash”. You may even offer a little discount initially to get attention. If enough businesses and consumers started participating, it could take off. If we forced the government to eliminate the Forever Stamps due to the coming losses – at least we would have done something.

Just please don’t share this with China or they may bid up the stamp market while dumping their Treasuries. Wink.

Footnotes: Now before you start tell me how ineptly run the US Postal Service is – let me just say – I AGREE! But so is the US government overall and if I had to decide whether I wanted the folks at the USPS managing my healthcare or the Congress, Senate and President, I would opt for the USPS. They actually were the ONLY branch of the federal government to turn a profit until email came along. Back in the 90’s they were turning profits of over $500 million a year. I do not sell gold and this is not a commercial. My goal is to bring value in the quality of my columns because writing is one of my singular greatest felicities and my goal is to eventually leave the business of investment banking and do this full-time. If you would like to use material from the columns, feel free, just please use proper attribution. Contact: MrArbitrage@TableOfWisdom.com