The unMitigated Hubris of putting Personal Legacy before Country

It is NOT over for conservatives if we have the will and the fortitude to use our God given brains instead of capitulating to the easy, thoughtless choice. 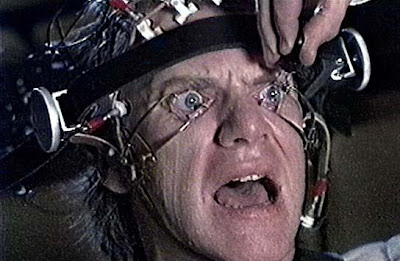 This is just like watching the film "Invasion of the Body Snatchers" when by the end of the film, the people of the resistance give in to their urge to go to sleep. Are we those people - or do we have the courage to see this through to the end? Is America worth the fight?

Those pseudo-journalists at Fox who MANUFACTURED and defrauded their viewers by sitting on facts about Mitt Romney's pathological lies, the most egregious perhaps being the lies where Mitt claimed not to have supported the Federal mandate when he in fact ADVISED Obama to utilize it - those media scoundrels are in high gear now wearing the conservatives down, into submission.

If we look at what our founders pledged against all odds, those of us who quit should be ashamed for giving up and joining the establishment herd in recklessly nominating the ONE Governor, Republican or even Democrat - in the entire nation who inoculates Obama on his most vulnerable positions -

recklessly nominating a former CEO of a "Wall Street" investment banking firm during a time of unprecedented acrimony toward Wall Street by the general population of America.

I have nothing against Wall Street as a former Wall Street professional myself; however, the absurdity of this choice of candidates under the previously expatiated circumstances demonstrates that Willard Mitt Romney must be the singular most SELFISH human being in the nation for even RUNNING for the presidency at this time.

From where might Mitt’s sense of entitlement originate? It is a FACT that Mormon doctrine teaches that Jesus and His Father were mere men who earned their salvation and REACHED "godhood". It is a FACT that the goal of Mormon MEN is to reach godhood themselves. (Women - don't qualify unless they marry Mormon men, hence the virtue of polygamy).

It is apparent that Mitt Romney already has a "god complex" because it takes that degree of arrogance for this man to put his own insatiable need to procure the presidency - ahead of the entire fate of the country.

For a man with all the wrong baggage as previously enumerated at the worst possible time to have it - to STAY in this race, that man must believe he is well on his way to the superiority of godhood; otherwise he must have a degree of contempt for this nation only paralleled by Obama himself.

Mitt Romney represents the epitome of selfishness akin to the women in 1 Kings 3 who suffocated her infant child in her sleep after rolling over on him. She switched her baby with that of another women with whom she lived.

To test the plaintiff and defendant, Solomon's wise verdict was to "split the baby in half" and give half to each mother (killing the baby of course). Solomon issued this verdict knowing that the REAL women loved her baby so much that she would YIELD to the charlatan women by dropping out of the suit – to SAVE her baby whom she loved. And he knew the deceitful women would be willing to let that child -die- before giving up.

After examining all of the absurdities of this Mitt Romney candidacy, it is clear that this man is utterly disqualified from claiming the tribute of patriotism. Mitt Romney is willing to see the constitution and freedom abrogated in 2012 - or he must be so delusional he believes he has reached the godhood and can't wait until he dies to be issued his own planet. In that case he would also resemble the Prodigal Son who had to have his entitled inheritance NOW.

I know I am upsetting many Republicans by propounding the facts in logical sequence. I know they just want me to fall asleep and let my body and God given brain be "snatched" like millions of others.

I will NOT stop exposing this disgraceful candidacy because I believe my country is well worth any ridicule, grief and contumelies cast upon me by those frustrated and tired souls who resort to such tactics. I understand they do so because that is all they CAN do in response to the self-evident facts. Facts are indeed stubborn things.

There is not even a diminutive quantity of logic or reason that can counter the mere SAMPLE of absurdities I just pulled out of an extraordinarily abundant hat full.

The elite in this party whom we allow to wag the dog every four years expose their transparent shallowness in their words on a daily basis. For the past two weeks, the new mantra by Karl Rove and Dick Morris at Fox News has been “Rick Santorum is damaging HIS BRAND by staying in this race”. They have been saying that “Newt Gingrich is damaging his brand” as well. These ambitious pretenders expose what they are without thought or regard because they cannot help it. Their shallow lusts for power and plaudits permeate every fiber of their being.

It never occurred to these imposters that there are people, like our FOUNDING FATHERS who believe so passionately in the God given principles put forth in our Declaration of Independence that they MIGHT NOT give a rat’s ass about their “BRAND” and be WILLING to pledge their lives, their fortunes and their sacred honor.

It would be SO EASY to give in once again - like I did several years ago when sitting with a room full of Christian Republicans here in Palm Beach Gardens, Florida who argued AGAINST ME that "Foley might be a homosexual, but he's OUR homosexual."

I'm not making this up. Christian Republicans fought me just as some do now regarding Romney - contending that "Foley's seat is too valuable to risk" - despite knowing that he was pro-abortion and his deviant behavior was known to many throughout the Republican circles of PB County.

My argument was that we as Christians have an OBLIGATION to stand for potential Republican replacements to Foley. What kind of faith do we have if we think our God is too small and too powerless for us NOT to compromise by turning against the commands in His word?

The result of the ongoing Foley compromise -as we know- is that WE WERE HANDED OVER TO OUR ENEMIES AND WE LOST OUR MAJORITIES IN THE HOUSE SENATE AND THE WHITEHOUSE.

This primary is an opportunity to get it right and learn from our mistakes. We do not have to nominate an unacceptable candidate. If conservatives can fight in this “4th quarter”, a brokered convention could bring about an acceptable candidate to ALL sides of the GOP. I will not comply with those people again.

The nomination of Willard Mitt Romney is political suicide and is every bit as wrong as supporting Foley was. If Romney is afforded the prize of his insatiable lust for the sake of legacy, we will be as successful as the builders of Babel.

I PRAY that God will help America to wake up or that he will remove Romney from this race by divine intervention.


THIS IS NO TIME TO GET DISCOURAGED OR TO CAPITULATE. We conservatives MUST stand behind Newt now and send him a check. I know times are tough financially but let us reach down deep and pay off that $4 million debt Newt’s campaign owes so that he is not dependent upon the establishment to make concessions.


Let’s “money bomb” Newt. If we have to hold garage sales or bake sales for Newt to STOP the liberal Romney from BUYING this election with the help of his sleaze bombs and Fox News – LET’S DO IT! YOUR COUNTRY IS WORTH THE SACRIFICE.


I am going to set an example right now and start this money bomb set for next Wednesday. I am hereby listing this autographed, notarized Devin Hester High School Football card on ebay http://cgi.ebay.com/ws/eBayISAPI.dll?ViewItem&item=230775140701  - and am pledging 100% of the proceeds to Newt Gingrich’s Presidential campaign.


I will donate the proceeds to Newt immediately after receipt of payment to my PayPal account after the auction closes on Wednesday, April 17th and will post the receipt at http://www.tableofwisdom.com/


I am encouraging all conservatives to do the same and notify us with a link to what YOU are selling in the comment section below this column http://www.tableofwisdom.com/2012/04/grass-roots-plan-to-money-bomb-newt.html  to support Newt so that we can bid on YOUR item.


It is time to show the RINO establishment what we are made of. Suck it up; send Newt some cash or pledge the proceeds of your own item on ebay so NEWT does not depend on the RNC and Romney to get out of debt.This is truly a GRASS ROOTS EFFORT in the way elections SHOULD be decided.Spread the message LIKE NEVER BEFORE and let us shock the world.


Contact: MrArbitrage@TableOfWisdom.com
Posted by Table Of Wisdom at 1:19 PM