Gore Makes Money for Nothing but His Chicks Aren't Free


“Senator” Al Gore. He is now reportedly wealthier than Mitt Romney as his net-worth is conservatively estimated to be at $300 million dollars. What exactly did Gore do to gain such wealth? It’s really quite amazing. After leaving government with a pile of debt, he was given positions on the Boards of Google and Apple.

Typically, people who make it onto the Board of any major corporation have impressive resumes in business and are given modest compensation of say $50,000-$100,000 for their occasional visits to board meetings. Al Gore on the other hand was given stock options in these companies for “consulting” – which made Gore a multimillionaire at the expense of shareholders who actually risked capital to acquire shares.

Yes, options do cost money when they are exercised. When companies issue these options as incentives (usually to employees), if or when the stock price rises and the options are exercised, the company has to purchase shares at market and sell it to the employee at the lower strike price. The only alternative is to issue more shares and dilute the shareholders or give shares from the Treasury from past “share buybacks”. It costs them either way.

Gore’s Apple shares alone are worth about approximately $30-$35 million and his Google is estimated at $100 million.  Now, many of us have known or heard of someone who picked a skyrocketing stock through dumb luck or investment acumen and made a killing in that stock as they held on to it for a few years. With this guy however, lightning just keeps striking – over and over again.

So he comes out of the Washington with a bunch of debt. Then he finds himself, a man who never worked in the private sector much less start a business - having stock options dumped in his lap by two corporations whose shares turn out to be the biggest grand slam performers of the entire first decade of the 21st century?

The luck doesn’t stop there. Then – he uses his new fortune as seed money enabling him to put his visionary business sense behind his OWN brainchild. I say “visionary” because nobody else had the foresight to fill the obvious vacuum in the mainstream media that begged for of all things – a liberal television news network featuring talk shows hosted by liberals. With such a sure thing as that business plan and virtually no competition at all (tongue firmly ensconced in my cheek) – it still managed to fail.

I don’t know whether we should call him Forrest Gump or “Gold-finger” but despite the monumental losses by the company, Gore still managed to not only avoid bankruptcy but add another easy $100 million to his net-worth by selling his –failing- cable network to none other than Al Jazeera, which is financed by the oil fortune of Qatar.

We know Al Gore is no Warren Buffet or Peter Lynch so how does he keep doing it? I would like to know what kind of advice he’s giving Google to warrant them giving him $100 million dollars in stock for being a “Senior Advisor?”

There are many pieces to this puzzle but one can almost make out the picture. It seems more like Al Gore is simply a funnel through which money gets transferred from companies run by liberals to “causes” that stand to make global elites trillions of dollars through “Cap & Trade”. Though this project has been a little work for them, they believe they will eventually succeed when they finally wear down the free-world with junk science to the point where opponents capitulate out of exhaustion or be hauled off to concentration camps for “eco-terrorism” (stopping progress).

It really is a simple strategy of wearing down the opposition by incessant badgering and constant repeating of lies and pseudo-science right in the face of the scientific truth supported by the mounting empirical evidence. With the help of the media and public schools, they simply scream the loudest.

Recent headlines demonstrate that the sun has produced major solar flares this December and January. You can see in the NASA video there have been some fierce explosions emanating from the sun and oddly, days later, we have recorded historic high temperatures on planet Earth.  Is it mere coincidence?


What is resulting from these eruptions on the Sun are called Coronal Mass Ejections (CMEs). It takes between one to five days for CMEs to reach the Earth. The Sun normally produces about -one- CME every five days. During the Solar Maxima, which happens every 11 years, it produces three CMEs – every day.

We are in the Solar Maximum but that doesn’t stop the pseudo-scientists from debasing themselves for their government patrons. That did not stop Barack Obama from advancing the global warming agenda in his inaugural address. Keeping Americans uninformed about galactic conditions doesn’t take much effort but the reason they cover this up and instead blame the weather on carbon dioxide is that it’s a little more difficult to blame Exxon Mobil and sell Americans on the necessity of a “Cap & Trade” credit exchange in Chicago in order to prevent sun spots and solar flares. That in turn makes it more difficult for them to make hundreds of billions of dollars by extorting corporations around the globe - and they like hundreds of billions of dollars.

Perhaps we cannot prove that the volatile ball of fire around which we and other planets revolve is the cause of the recent fluctuations in temperature. However, given that it appeals more to basic sense that there would be a correlation, maybe we should investigate the collusion and actually think about prosecuting them for fraud. If we wait for them to prosecute those -who question- the Nobel Peace Prize winning Gore and Nobel laureate Obama, the stakes will be much higher for the opposition.

As I wrote in my November 2011 column regarding effects of the Solar Maximum THE PSEUDO-SCIENTISTS ARE BACK FOR ANOTHER ROUND OF PROPAGANDA "The weather is going to be getting worse over the next year and they know it. As Americans are more gullible than ever, be ready for an onslaught of exploitation like you have never before seen."

All of the aforementioned aside, with or without a carbon credit exchange, Al Gore is indeed living the life of a rock star. He seems to be very adroit at selecting the best companies to give him “fifties of millions” apiece in free stock. It’s nice work if you can get it (as they say). Gore, like in the old Dire Straights song is basically making “money for nothing”. We don’t hear much about this half-a-billionaire bachelor’s love life but rest assured that his “chicks” are not “for free” as you can see by the litany of groping and fondling charges below: 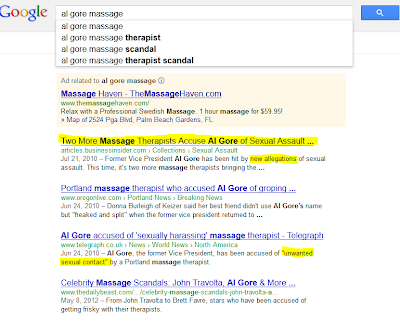 I guess Al really did respect and learn from William Jefferson Clinton all those years in Washington. Make your own banner at MyBannerMaker.com!
Posted by Share Activist at 7:49 AM