Checks & Balances are DEAD; What Other Agencies are the Administration Abusing?

"Failure to Supervise" is the charge in the civil action being leveled by the SEC against legendary hedge fund manager Steve Cohen.  This story has been running ad nauseum on CNBC since Friday afternoon.  There is little information to go on but my conjecture is that this is another agency being directly used and abused by the Obama Administration to accomplish greater control over anything financial.

Based up the well established pattern, his finger prints can be found anywhere intimidation is being exerted by government agencies.  The default assumption with this President should be that every federal agency is being used beyond its purview.  We just happened to discover the IRS, DOJ and NSA abuse but  it is just a matter of time before we discover that he is coordinating with all major federal agencies such as the FCC, FTC, FDIC, and today's headliner - the SEC much the same way.

The separation of powers and system of checks and balances are dead and Obama knows it.  He knows that the GOP is led by self-serving, legacy seeking, cowards like John Bohener, Marco Rubio, John McCain and Lindsey Graham.  He knows they will do absolutely nothing about his treachery and now that he has outlasted the empty rhetoric of these punch drunk Pullaccas without so much as a Holder resignation, Obama knows that he is more powerful than ever before.

If you measure his power by temporary poll results, you are making a fundamental mistake.  Obama is not seeking re-election and phase two of his plan has always been to see through his destruction.  His power should ONLY be measured by - WHAT HE CAN GET AWAY WITH without removal and/or criminal prosecution.  Obama is currently more powerful after the IRS, NSA and DOJ scandals because the larger the scandals he gets away with, the more inoculated he becomes, the worse each future scandal would have to be to foment any degree of outrage.  Obama's talent for deception and evil is impressive.  It is though Snowden actually HELPED him and his administration as Snowden released the facts of their assault on our freedom - while simultaneously becoming the story that will outlast and overshadow the evil that he actually exposed.  MORE INOCULATION!  Surreal is the best way to describe it.

It will take more and more treachery against America to even raise an eyebrow.  He knows he is free to utilize all federal agencies and our tax dollars as personal assets to further his agenda because there are but a handful of legitimate statesmen in the House & Senate and there is no way they can get the votes to accomplish anything that would bring Obama to justice.  While these scandals were at the peak of media coverage and the talking heads were floating questions of a possible Holder resignation, I stated there is absolutely -no way - Obama would allow Holder to resign because he knows he is going to outlast these poseurs as he knows they are bluffing.

I pity the washed up, delusional talking heads that are regarded as GOP sages by Fox News.  They actually believe that Obama is damaged by these scandals.  The reality is that our ingenious founders gave us these checks and balances for a reason that is 100% lost on these slip & fall lawyers who make up congress.  At this point our founders would be hashing out criminal prosecution and perhaps discussing capital punishment in the event of conviction - while Bohener, Graham & McCain do not even have the testicles to utter the word impeachment.

The moral of this story is that it is too late for the constitution of these United States in this unprecedented time of willful ignorance and perversion.  No matter what the polls say from week to week, this nation has signed up for voluntary slavery.     The -only- productive thing that can be done for Americans who know and venerate what it means to be an American coalesce in the God Fearing States of America and further buttress our state and local legislatures.  The handful of patriots in Congress such as Ted Cruz, Tim Scott, Mike Lee, Rand Paul and Trey Gowdy should be regarded for what they are - patriots holding up at the Alamo.  They are buying us time to strengthen our local and state governments.

And PLEASE South Carolina, I love you, do you think maybe you could recall that tumor Lindsey Graham and allow your Governor Haley to appoint your venerable Congressman Trey Gowdy to join Tim Scott in the Senate?
Posted by Share Activist at 5:21 PM No comments:


It seems that Barry is getting jealous of Trayvon Martin.  Sick though it is, it is typical dictators with  messianic complexes to become envious when someone steals the headlines from them.  Obama couldn't resist and had to take back the attention apparently by saying that "Trayvon could have been me 35 years ago."

I don't know about that but he certainly is a dead-ringer for Frank Marshall Davis. 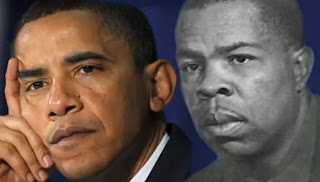