We all have heard how War Hawk Obama wants to hire out our military to Al Qaeda because he just cannot allow atrocities in Syria between Muslims to go on without US intervention.  The sudden change of morality for Obama and his Democrat pawns begs for examination. Obama certainly has no problem with the chemical weapons used in America every day.  High concentrations of saline solution are used to burn the skin off of babies in the womb of Americans with his full approbation.  Obama renews the death warrants of innocent babies on a daily basis.   Let us scrutinize the dichotomy of Omorals and attempt to get an understanding of the nuances:

How the unborn baby is killed in a cruel Saline Abortion:

The saline abortion procedure can only be done at 16 weeks or later when enough fluid is in the amniotic sac surrounding the baby. A long needle is inserted through the mother’s abdomen and the wall of the uterus into the amniotic cavity. As much amniotic fluid as possible, usually about one cup, is withdrawn. Then, a small dose of saline solution is injected. If the woman doesn’t experience any immediate signs of allergic reaction or rejection, the remaining solution is injected into the amniotic sac.

After the toxic mixture is injected, the baby swallows the salt solution and is poisoned and his skin burned. After suffering for 1 to 1½ hours, the baby’s heartbeat stops. The corrosive effect of the salt solution burns the lungs and strips away the outer layer of the baby’s skin. The mother goes through labor and soon delivers a burned, shriveled and dead baby. The abortion, in medical terms, is considered a success.

Debbie Wasserman-Shultz claimed she supports Obama attacking because she supposedly was affected by "pictures of dead babies" in Syria – but she isn’t appalled by factual reports and evidence of American dead babies found in garbage bags outside abortion clinics.  In fact, like most militant leftists, she considers what is displayed in the photo below to be a sacred right for women to execute without any legal animadversion and for any reason whatsoever.  Moreover, they consider it absolutely vile, radical and insensitive for someone like myself to expose -their- crimes against humanity. 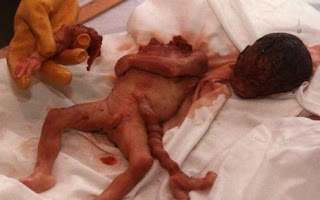 The contradictions are so glaring that only the aloof would support this rogue in the White House who obviously needs the distractions as they ram through amnesty, attempt to quell the battle to de-fund “oNerocare” and further assault our Bill of Rights.

Then there’s this pseudo-gigolo poseur, John Kerry-Heinz carrying on before a Senate committee with his foreigner wife hanging in the background.  Does Kerry think Assad is as bad as his fellow Vietnam veterans? Did he go as far as to comparing Assad to Genghis Khan as he did the Vietnam war veterans? Or did he stop short of that?

I truly feel sorry for anyone who thinks there is possible refuge and hope beyond working feverishly to buttress and empower their state and local governments at this point.  There are not enough state in this "union" with enough moral people to employ the degree of solicitude requisite to turn back this tsunami of immorality and willful ignorance.

America has undergone a literal Marxist coup d'éta.  Internal Sabotage is the order of the day.  Of course Obama knew Obamacare would collapse the already bankrupt system with additional trillions of dollars of unfunded liabilities in addition to doubling the trillions of actual debt.  Another war will like with Rome, further weaken our defenses as we cannot fight on so many fronts and leave our borders are undefended.

The facts clearly reveal that we are living a nightmare to an extent that even horror screen writers never dared asked us to blithely entertain.  This man is the Manchurian Candidate (without the happy ending), the Trojan Horse and his health care policies are that of Soylent Green, where "retirement" for many will be a euphemism for euthanasia.

The dichotomy in omorals can only be understood in the context of evil.  Conservative or Liberal, God has given us all the internal knowledge to recognize that every single policy, not some, not many - literally - every single policy and every single moral stance this man takes is against the natural state of God's creation.  That is why liberals are miserable.  They know this to be the case despite pretending otherwise.  They have to either live their lives in denial or embrace the perversion (as Obama has) and delight in evil while seeking to destroy that which God made for good.  My opinion is that those who do not wish to capitulate and admit to themselves that they war against their Creator (or especially admit they HAVE a Creator) - are the most miserable on this Earth because they can eat and drink but they cannot be "merry" even temporarily in this life. Make your own banner at MyBannerMaker.com!
Posted by Share Activist at 9:17 PM