Why are so many Obamacare alleged "Enrollees" from California?

Marketwatch calls the week "rough" for Obamacare as the administration reported only 100,000 "picked a marketplace plan" in the first month of operations.  Of course anyone who prefers not to be deceived must parse every syllable of every word uttered by these pathological liars of impeachable character.

When the elected fraud in the White House has his appointed scoundrels say "picked a marketplace plan", intelligent Americans MUST assume the swindler wants you to assume that "picked" means the same as enrolled.  Where the intelligence comes into play is that you must also realize that they are deliberately deceiving credulous Americans and if they had enrolled, they most assuredly would have stated - enrolled.

The chart below indicates that 65% of Obamacare "enrollees" (as Marketwatch elects to call them) come from five states.  Regardless of whether the 65% is from the reported 100,000 or whether they actually know the real number of enrollees and are basing the percentage off of that mystery number -  regardless - it is interesting to note the high number of enrolles who hail from the illegal alien sanctuary state of California, followed by New York.

It is easy to predict the outcome with this regime.  All one must do to be 99.5% accurate is to think of the outcome that is most outrageous, most perverse and does the most damage to America and you will be right almost 100% of the time with the exception of when their plans of sabotage somehow backfire.

Therefore, my prediction is that many of these enrollees are illegal aliens using someone else's Social Security number and paying with someone else's money. 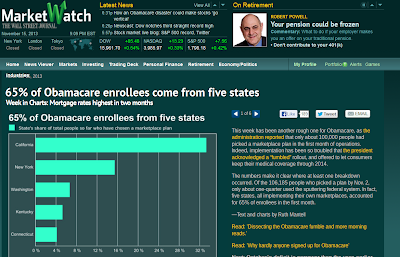 Make your own banner at MyBannerMaker.com!
Posted by Share Activist at 6:39 PM