The Real Red Dawn is Here - What States Must do immediately

After three decades of Americans living in denial, Red China is here and it is masquerading behind the color blue.  Over the past couple of weeks I have practiced what I have preached by reaching out to my state legislature and filed a formal complaint with the Florida Attorney General's office against Amazon, Inc. specifically as a customer.  Boycotts can be effective but much more organized efforts are urgently warranted in this state of emergency in which we find ourselves.

The nation has remained at DEFCON-5 as the nuclear threat has been seemingly mitigated since the 1990s; however, nuclear is not the threat by which Marxist tyranny has manifested itself.  As we were totally blind to our vulnerabilities and broadsided by Al Qaeda in 2001, we have been completely aloof as we found ourselves in the midst of a Marxist coup de etat that began in March 2020.  The reality in America is that we would be at DEFCON-1 right now if the intention of the outdated scale were updated to express the true threat to the liberties of citizens of the United States of America.

Almost daily we hear stories of major companies being attacked due to the faith and/or political beliefs of their founders, this past week Mike Lindell of My Pillow fame was the latest target of the ever treacherous Jack Dorsey and the company he abuses as CEO, known as Twitter.  After de-platforming the President of the United States (who actually revived the company, the stock of which was at rock bottom in 2016) this week this rogue CEO has done the same to former Assistant to the President, Director of Trade and Manufacturing Policy, Peter Navarro. 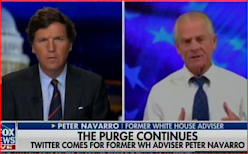 It is as though these companies along with the party they serve are shamelessly following the edicts of the Chinese communist dictatorship every step of the way.  We do not have time to wait until our next third-world election for this coup to be stopped.

The states must coalesce and adopt harmonious legislation among the "constitutionalist" states of America with the focus of stopping the predatory attacks of companies that have already begun to shut down the communications, finances and general livelihood of 75-80 million Americans.  By exercising our rights as sovereign states through the promulgation of state constitutional amendments designed to protect our fellow citizens from such effrontery, we the people can stop these companies from conducting business in our respective, constitution venerating states until such unconscionable actions cease.

We must augment our power in numbers, using the proper channel of state government.  If 25-30 states were to join together and agree to such legislation, these companies would be devastated (by loss to revenue, earnings and share valuation) and would be forced to abide by the law instead of abusing their fiduciary responsibilities to their shareholders and their fellow citizens.

This would require sacrifice among consumers but to live in denial for one more day about the tyranny that is upon us will cost us everything.  If we are not willing to make temporary sacrifices as citizens of right now, we should be and will be forever ashamed in light of what our forefathers sacrificed for our liberty and we will live out the remainder of our lives in regret as will our posterity be sentenced to do likewise.

Following are my thoughts on what may be done to effectively fight this war on our liberties and a Proposal for State Constitutional Amendments that would lead to victory over the treachery being waged against us by monopolistic companies that have already begun to wage their war against this nation and our Bill of Rights.  This can be codified in Florida by ballot initiative but given the urgency, it is expedient that it should be legislated through our state legislature.

The states should have the ability to prevent social media companies from discriminating against citizens and companies based in their respective states on the basis of political beliefs or in the case of companies, based upon their fostering forums that allow free-expression of political and religious beliefs.

For-profit companies like Facebook, Twitter, Google and Amazon should be required by state law, to tolerate the expression of the political views of their users and if they do not, they should be open to individual lawsuits by their victims whose rights have been violated (individuals and corporations affected such as Parler).  Furthermore, when policies are instituted that are found to deny users and companies their right to expression of political beliefs, ISPs operating within those states should be required to block access to those companies until all policies that censor such expression are reversed.

Corporations such as Amazon should be blocked from transacting business within those states and/or pay substantial, ongoing fines for blocking the business of other corporations such as Parler on the basis of political expression being offered on their platform.

States should draft articles to adopt and enforce such laws in concert with one another.

Exceptions:  Companies existing as non-profit organizations such as churches and political action committees (PACs) should be exempted and allowed to limit expression if they choose to do so, based upon religious convictions and political views.